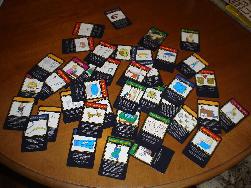 Chez Shea was designed by Joseph Levy and Karen Traite as a wedding present for Brian and Jessica Shea.

All of the pictures are original artwork by Joseph Levy, except for the following: The art for Cuddles and Not Tonight, Dear is by Jason Mutford. The photograph for Julian is by Jessica Shea. The card ideas and text (except for a few attributed quotes) are also original. None of the original artwork or text here may be used for commercial purposes. (That said, I would gladly pitch the less raunchy ones to Steve Jackson Games, but their submission guidelines explicitly state that they are not interested in Chez Geek supplements.)